Posted on September 24, 2010 by Sioban Krzywicki

Around a month ago, Emily suggested that we should each make a playlist for our iPods for the next long car trip we take. We could listen to one, then the other and that would be fun. She’s right, it would be. Unfortunately, I don’t feel any motivation to make a playlist. I currently owe around a dozen people mix CDs, but I keep putting off making them. I’m not entirely sure why. I like the people, I want to give them music I like and hope they like it too.

I used to love doing this. When I was in college and high school, I’d sit down with my stereo, pop in a blank 90 or 120 minute cassette and go through my record/cd collection and put together a tape for a friend. I’d have to consider how long each song was, how it transitioned from the one before and into the next. I’d think about the mood of the tape or the theme of the music. When you’re making a mix tape, you have to listen to all of each song. You have to be ready to hit pause at the end of each track and on some songs, figure out when it actually ends and the next one begins, trying to hit the button at that elusive point. When you were done, you had a gift that you’d really put something into. You could say something personal.

Then recordable CDs came along. There’s still some thought to it, you have to decide on the theme, mood, transitions and order still, but when you’re ready to make the CD, you just click a button and the whole thing goes together in a fraction of the time it’d take to play it. Sure, that’s good in some ways, but you lose some of the feel for what it’ll sound like when it is played. More recently, you’re not even sure that that is how it’ll be played. It is very likely that whomever you give the cd to will just rip it to their iPod or iPod like device or their computer and listen to the songs out of order or only a few of them. It loses a little more of the enjoyment of making the mix in the first place.

Now we’re at the point where you’re really just handing people files. Sure, you’ve made a playlist, but that’s an easily ignorable suggestion. It hardly seems worth the effort. You can give them a cd full of mp3s or a memory stick full of mp3s and there may or may not be playlists in there. If you’re lucky, the recipient will look for the list and it’ll be compatible with whatever player they use, but they’ll probably just take the files and mix them in with everything else. It just isn’t fun anymore. You don’t get to say anything with it, not of your own. The artists still do, of course and the music is still great, but you aren’t really a part of it any more.

I’ll probably get around to putting some of the cds together over the next month or so, but I certainly won’t be putting in the effort I once was. I’ll give printed playlists with the files, ’cause how else can you make sure the list is readable, but where do you store that? It isn’t really of a piece anymore.

The technology hasn’t passed me by, I still use all the modern tools. I like them and am growing to like them more every day, but I can also miss what has been lost.  Things weren’t “better back then”, I hate that phrase and it is wrong 99.99% of the time. Things were different and I can miss part of it while acknowledging that I don’t really want to go back.

On a much lighter note, I think it is funny that days after Emily and I had a conversation about this, an on-line comic we both like (Diesel Sweeties) posted this strip: 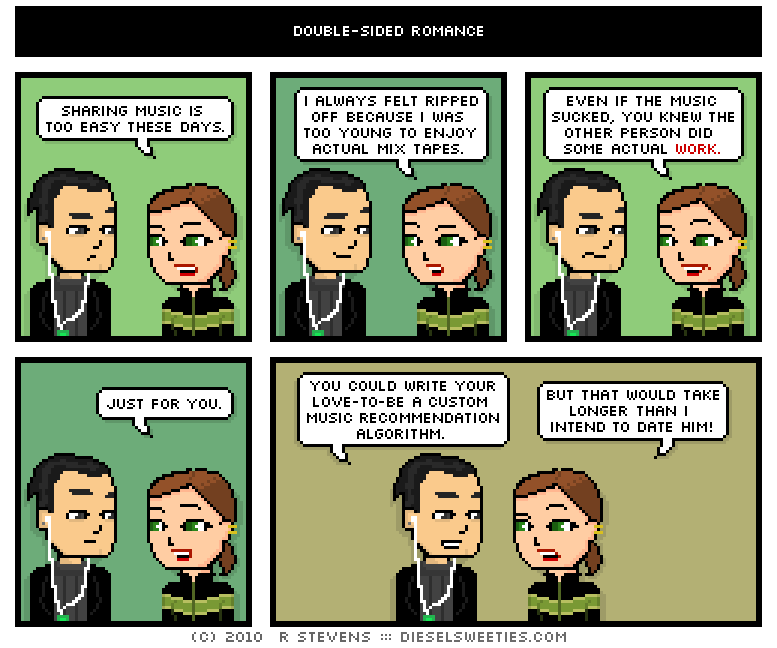 This entry was posted in Uncategorized and tagged iPod, mix tape, sharing, tech. Bookmark the permalink.